<p class="rtecenter"><span style="font-size:14px">Trans Day of remembrance (TDoR) is held on the 20<sup>th</sup> of November annually</span></p>

Rob is a member of our growing LGBT+ group here in the North West and lives in Manchester. He has been a member for approximately 12 months and is a trade union young workers organiser.

Rob is a former Co-Chair of LGBT Labour & Former Vice President of the National Union of Students, he has been campaigning for equality for a number of years especially around access to sport, education and health.

The Shout! group currently meet online and is open to LGBT+ GMB union members based in the North West and Irish region. Further details lisa.ryan@gmb.org.uk

Trans Day of remembrance (TDoR) is held on the 20th of November annually in order to pay our respects to Trans individuals who lost their lives due to transphobia, transphobic prejudice and transphobic violence. 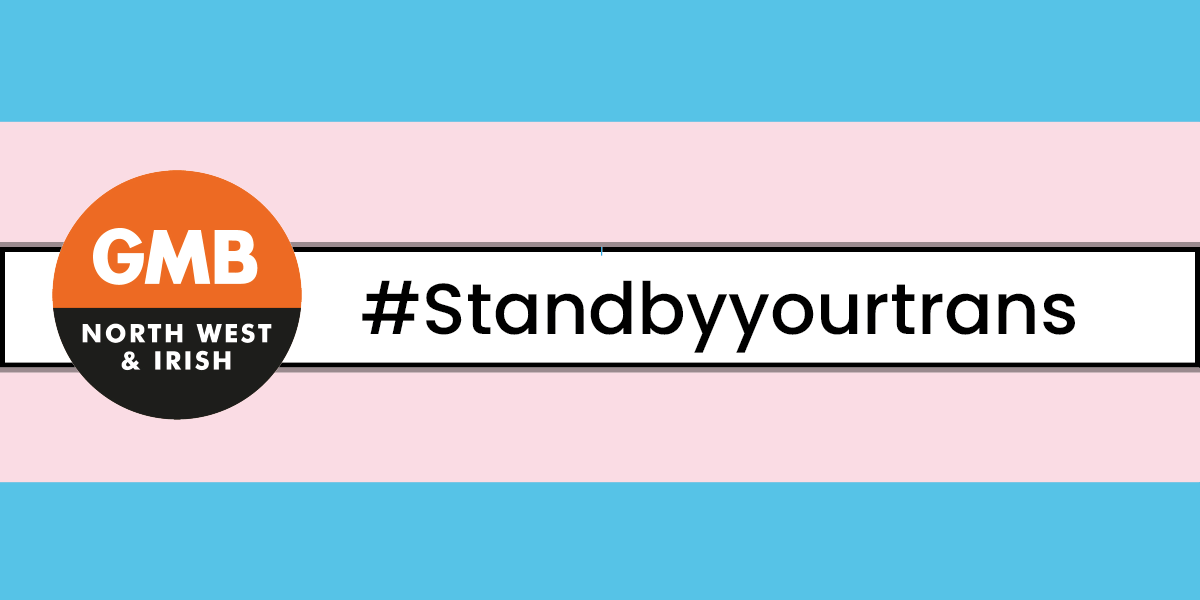 Why is it important that we honour Trans Day of Remembrance?

Trans Day of Remembrance is an opportunity to stop and reflect on the trans community, specifically on the abuse they face in their day to day lives, at home, within society and within the workplace. It's also a call to action for us as allies to help spark advocacy, support and change globally.

This day offers the opportunity for others to better understand the stigma, discrimination and barriers that many Trans people face. Education around what makes us unique tears down fear and false narratives that are present within the press and debate at large, as we have more in common than we do that divides us. As a gay man looking at the political discourse it is dangerously similar to the rhetoric & fearmongering that Lesbian and Gay people faced in the 1980’s. It is important we all show solidarity to our Trans siblings, and ensure we are challenging transphobia whenever it rears its ugly head.

TUC research has shown us that almost half of trans people (48%) have experienced bullying or harassment at work compared to over a third (35%) of non-trans respondents. The TUC research also tells us from one report into LGBT+ discrimination at work that 30% of respondents had their trans status disclosed against their will.

Additionally, research conducted by Stonewall reported that, one in eight trans employees (12 per cent) has been physically attacked by a colleague or customer in the last year & just over half of trans people (51 per cent) have hidden their identity at work for fear of discrimination.

Currently in the UK this Tory government have shelved plans to reform the Gender Recognition Act, the debate has put a huge spotlight on the trans community and has created an environment that is hostile towards our trans family. There is a great deal of support here in the UK for trans & non-binary people and for an inclusive, tolerant society where everyone should be free to live their lives and go to work feeling able to be their authentic self.

As trade unionists we firmly believe that every worker should have the right to dignity and respect in work, and that everyone should feel safe in their work environment, its why it’s so important that not only today, but every day we extend our solidarity to the trans community.

How can I help be a better ally?

The TUC has produced this guidance on how to be a good trans ally, it gives 5 ways in which we can all be better allies to the trans community,

1) Educate yourself – attend webinars, look at research conducted by Stonewall, the TUC and LGBT foundation*

2) Challenge transphobia - Stand up for trans colleagues and people, don’t allow comments that are derogatory to go unchallenged & ensure that you speak up even when trans people are not in the room

4) Listen – Make sure you listen to trans people when they tell you their pronoun and/or identity. If you make a mistake, correct it and move on. Do not dwell on your mistake, move on.

5) Respect boundaries – Do NOT ask trans people any questions about surgery or about their transition. This is both totally invasive and irrelevant to their identity.

For more information go to: https://www.tuc.org.uk/sites/default/files/2019-11/Trans_Ally_Guidance_2019.pdf

Other publications can be found here:

How can I get involved?

The GMB union Trans and Non-binary committee are asking members to create their own events in action for Trans Awareness Week they have come up with some ideas or suggestions for you to do;

Now more than ever we need to show our trans and non-binary family solidarity and I hope that you will join me in doing so not only during Trans awareness week, or on Trans Day of Remembrance but every day of the year.