Over the last few years the GMB has built up a large group of political activists throughout the North West & Irish Region, with the guidance of regional political officer Neil Smith. These activists have come out on many occasions to campaign against national and local government irrespective of political party, taking part in regional conferences like ‘Campaigns for Justice’ and ‘Activists Conference’.

Campaigns such as protecting the NHS, fighting for our members in local government facing the austerity cuts imposed on us from a Tory government, workers rights and LGBT equalities. Our activist have also campaigned on affordable housing, equality's, unfair dismissals and taking on the far right BNP.

Everything we do is political, challenging unfairness in our communities and on matters that affect our members.

Complete the form below and submit to sign up as a GMB Activist, and we will keep you informed of our activity in the region so you can come along.

This also means you can be kept up to date with political activity happening in our region. 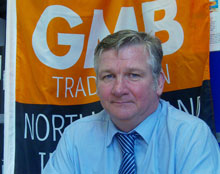