On Saturday 7th April 2018, Young Members from all Regions gathered in Birmingham City Centre before their National Young Members Network meeting to raise awareness of this year’s priority campaign “Wages Not Based on Ages”. Armed with postcards and pens, our passionate Young Members had conversations with people of all ages, gathering signatures ahead of the second reading of the National Living Wage (Extension to Young People) Bill in Parliament on 6th July 2018, asking MPs to vote IN FAVOUR of the extension. The “Wages Not Based on Ages” campaign focuses on ending the pay discrimination young people are facing and hopes to make hourly wage banding for different ages a thing of the past.

'It's ridiculous how those who are aged 18-24 are often paid up to 46% less than co-workers for completing the same jobs. I am campaigning for a Living Wage for all as all workers have the right to a well-paid job no matter their age" – Ruth Pitchford, Chair of the Young Members Network

Currently, young people can be paid up to 46% less* for doing the same roles as people aged 25 and above and the National Living Wage does not apply to under 25’s, meaning that younger, sometimes more experienced, workers are paid less than their older colleagues doing the same job. After conversations with the public in Birmingham, it became apparent that this was something the public are happy to support and the feedback on the day was positive and inspiring; with some parents telling their children they were signing the postcards to help them in the future whilst others were encouraging their teenage children to sign the postcards themselves.

Afterwards, it was agreed at the Network meeting that a National Campaign Day of Action would be the next step to grow the campaign with all regions going out to gather signatures and raise awareness in their own areas. If you would like to get involved, please contact the Young Members Network via social media or follow this link to the regions Young Members section on the regional website CLICK HERE

(*Based on the current minimum wage for people aged 16-17) 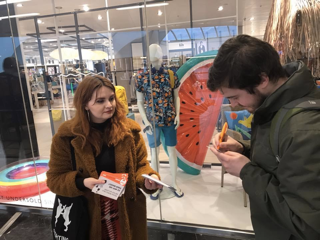