On the 14th and 15th November 2016, the fourth annual GMB Young Members summit was held by the Birmingham Region. All nine regions came together to set out the year ahead and reflect on the past year. The GMB Young Members Network is a membership led democratic body that works to bring young GMB members together, making their voices heard in the union and in society by campaigning on issues affecting young people at work.

Over the weekend, the attendees gained a wide range of skills and knowledge from attending a wide range of workshops and listening to speakers. A well attended workshop which gained positive reviews was the ‘Campaign Workshop’ ran by Stephanie Peacock and Melanie Barnett, where young members had to plan and document their own campaign. Young members found this a useful part of the conference as they felt like they were able to take this back to their regions and would feel comfortable to help run a campaign in the future.

“I really enjoyed this, I took away some new techniques to go back to my workplace and campaign with, Using the campaign plan helped understand how to target an audience, and to plan my steps carefully, and how I can maximise my effect within my workplace.”  Other workshops included ‘Organising around Mental Health@Work’ and ‘Workplace 2020, Shape Labour Party Policy’.

North West and Ireland delegates; Daniel Jones, Becca Pitchford, Jonny Rolleston, Darren McMullan and Thomas Williams. Ross Holden and Ruth Pitchford also attended as the previous years’ committee. "Young activists are the life line of the union's future. We are the future union." – Jonny Rolleston.  Delegates also elected their own 2017 committee where Ruth Pitchford was then elected as secretary for the next coming year.

Introduced this year, the Young Members had their own awards that were handed out at summit. There was the work place rep award that was awarded to Dean Ismay for his hard work in Asda. Campaigner Award was awarded to Anyad Downie, and the General Secretary award went to our own Ross Holden. Well deserved by all three winners. 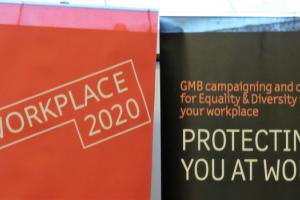