The theme of IWD this year is #BreakTheBias and we were joined by Ije McDougall, Founder of The Kairos Initiative, a Magistrate and a HR/Employment Law Expert.

While charting her way through life in the UK as an immigrant, she has faced questions of identity and self realisation. She has battled self doubt and imposter syndrome continuously and understands how limiting they can be.

An advocate and activist who uses her public speaking platforms to raise awareness and to challenge injustice, having beat the odds herself, Ije is well versed in the challenges that face people of minority in the UK.

As a British Nigerian who originates from North East Nigeria, Ije has first hand knowledge of the consequences of extremists and extremism. Her charity, The Kairos Initiative, was set up to support victims of insurgency in Nigeria.

The Womens Network have launched a new campaign to raise awareness around victim shaming.

Like the vast majority of people, we have been saddened and shocked at the increasing instances of attacks of violence against women and girls resulting in death or serious injury. An unprovoked attack against anyone is despicable but women and girls, or on occasions of fatal injury their families and friends, have the added burden of their own behaviour being called into question.

All too often we read about a sexual attack on a female and the first questions to be asked will be ‘What was she wearing?’ ‘Why was she out alone at night?’ ‘What could she have done differently?’.

This narrative takes the focus off the cause of the attack, the perpetrator, and what we can do as a society to stop raising people who feel emboldened enough to commit these crimes. The Womens Network believe a campaign is needed to change the conversation, to stop asking ‘What was she wearing?’ and instead ask ‘Why did he think it was okay?’. We need to educate boys and men that the length of a womans skirt does not indicate consent, buying a woman a drink does not automatically entitle you to anything further.

Cases of sexual assault involving alcohol will lead to the inevitable accusation of a woman being at fault for ‘getting too drunk’ to know what was happening, when in reality if a woman is too drunk to say no then she is too drunk to consent to sex.

We want to make it clear that we know ‘most men’ would never think about attacking, harming or harassing a woman and are as horrified as we are when there’s news of another attack. What we do want is to stop ‘locker room banter’. Many of these misogynistic conversations happen when there are only groups of men around, there are no women there to call this behaviour out, so we need other men, as our allies to challenge and call out this language and make it unacceptable.

We have developed a poster campaign which we hope our activists will take into their workplaces to raise awareness, to start challenging conversations and to change the culture from blaming women and girls for being attacked. #NotWhatConsentLooksLike 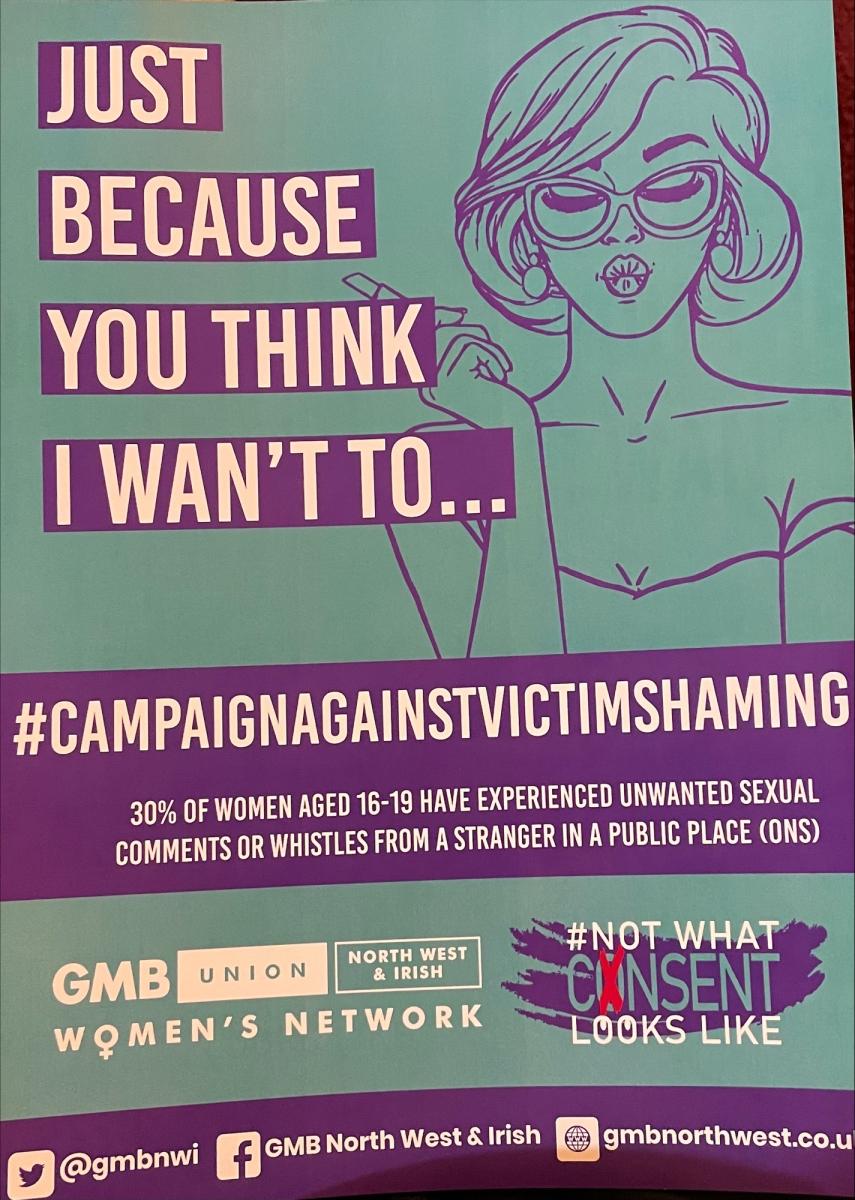 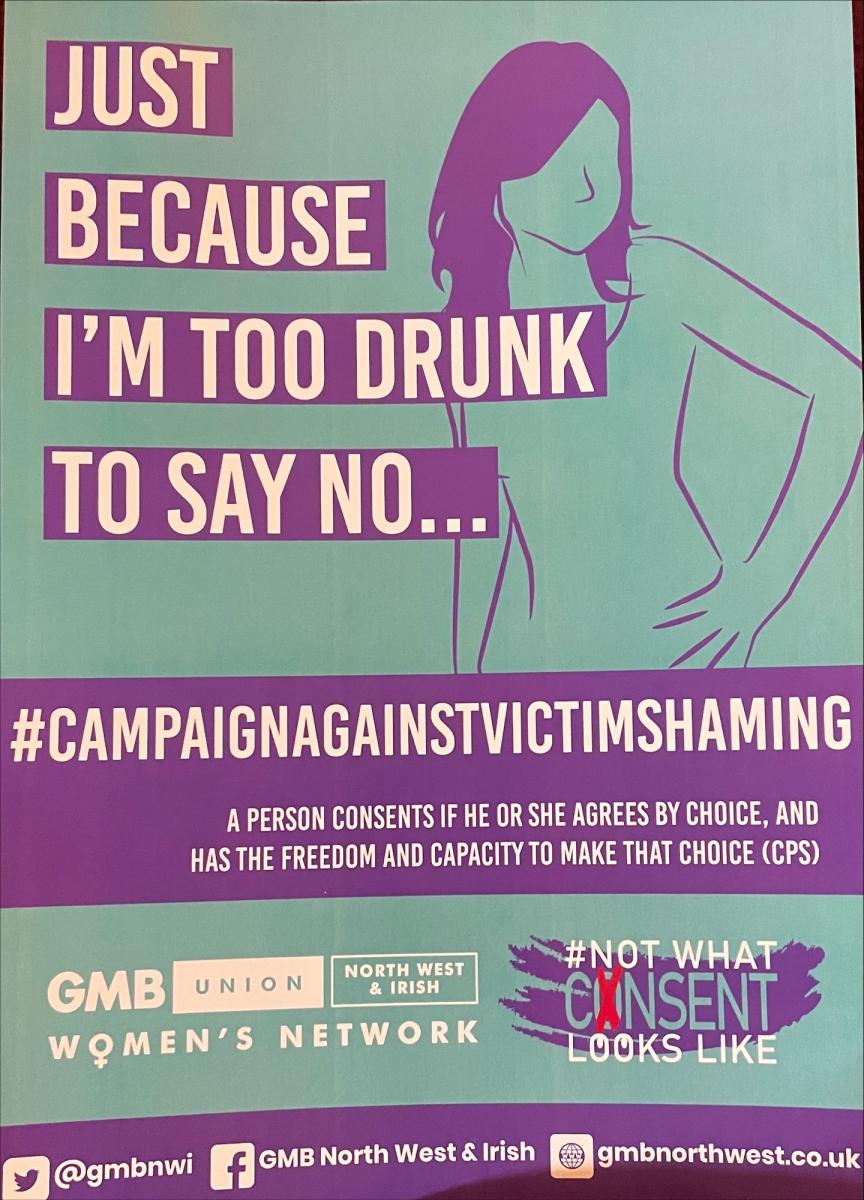 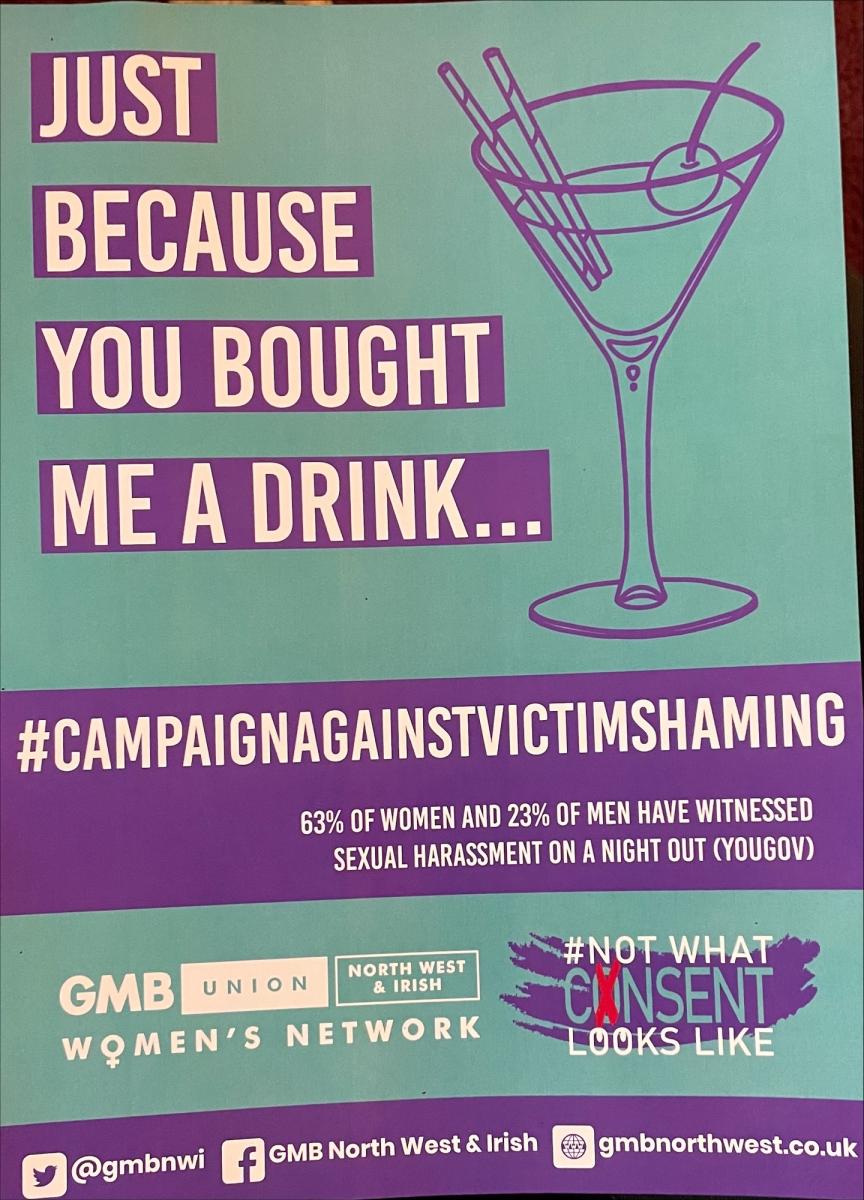 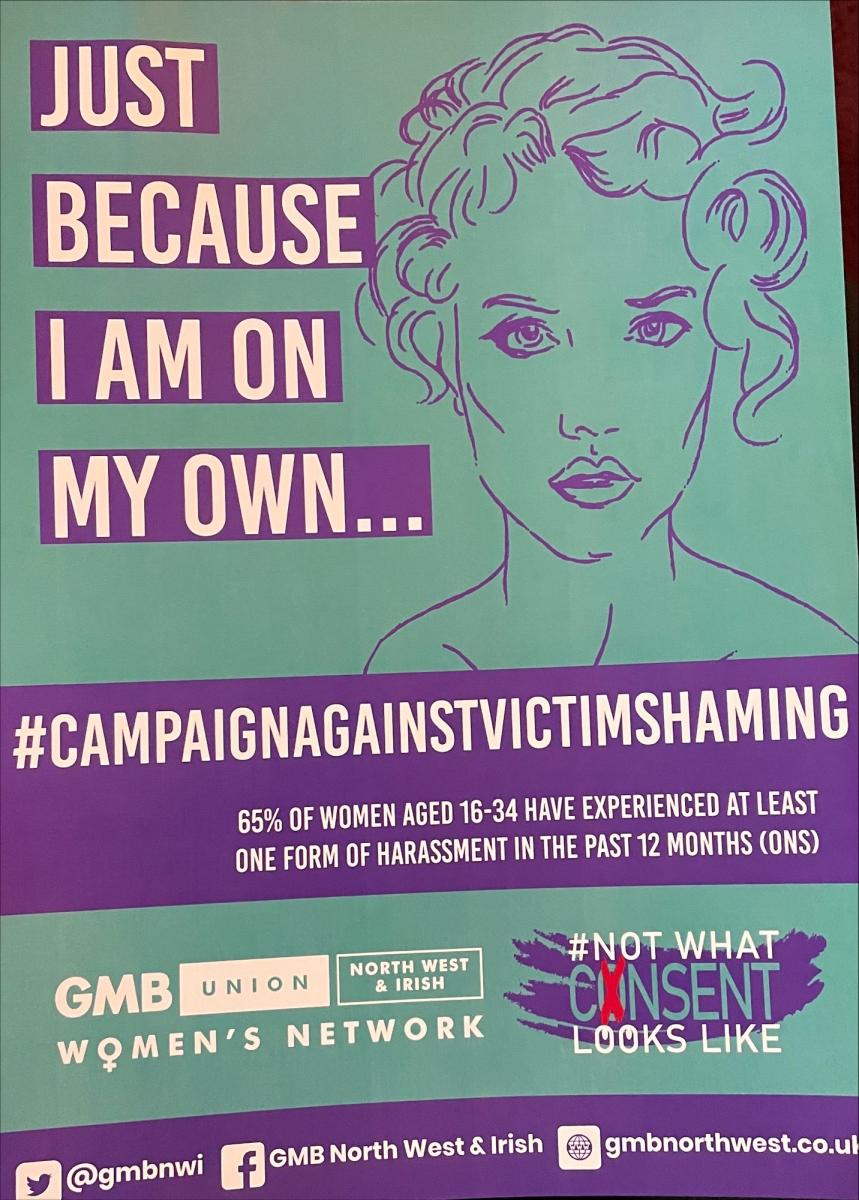 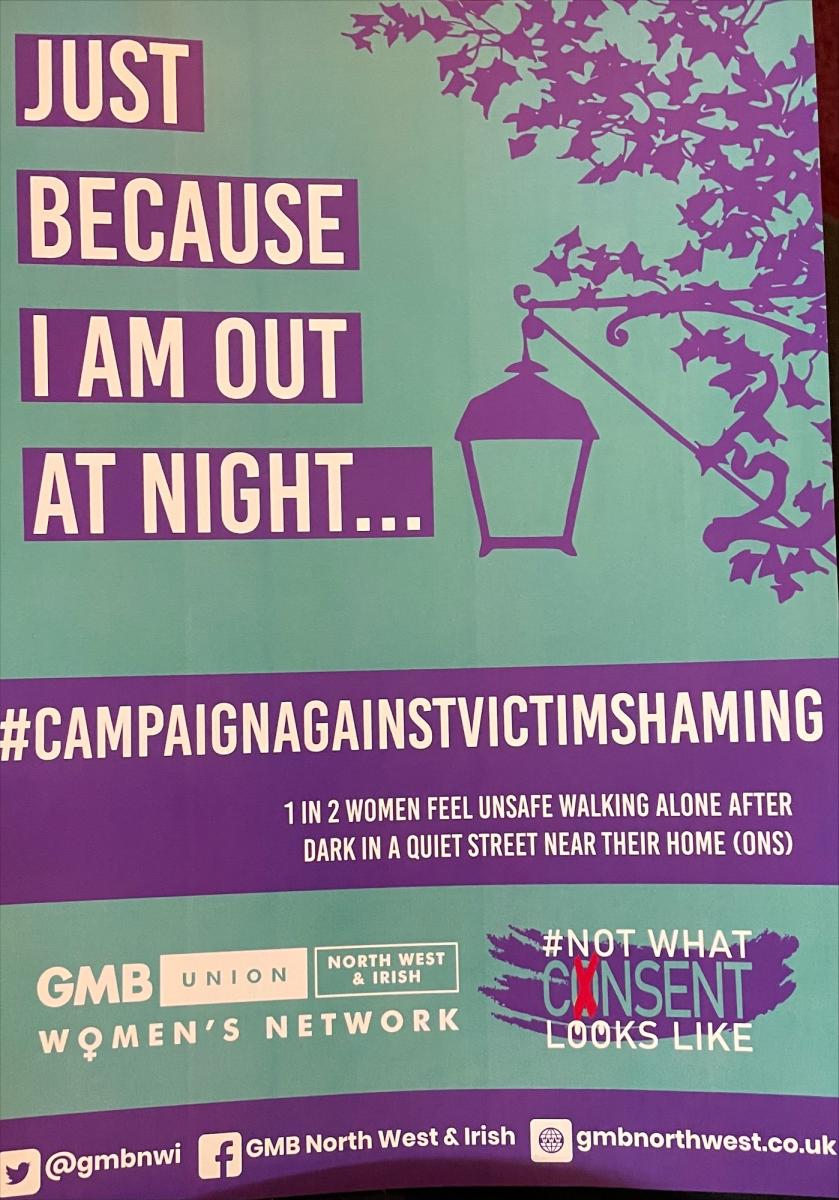 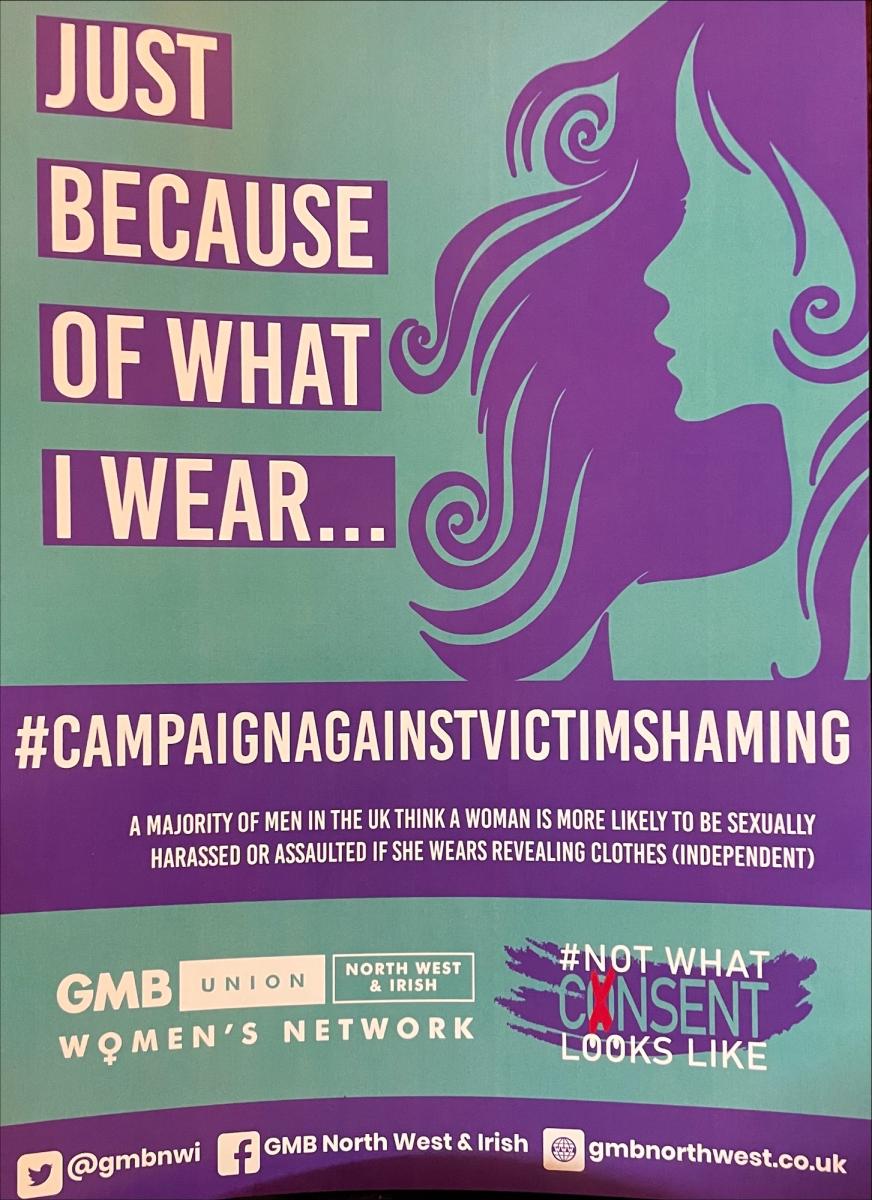 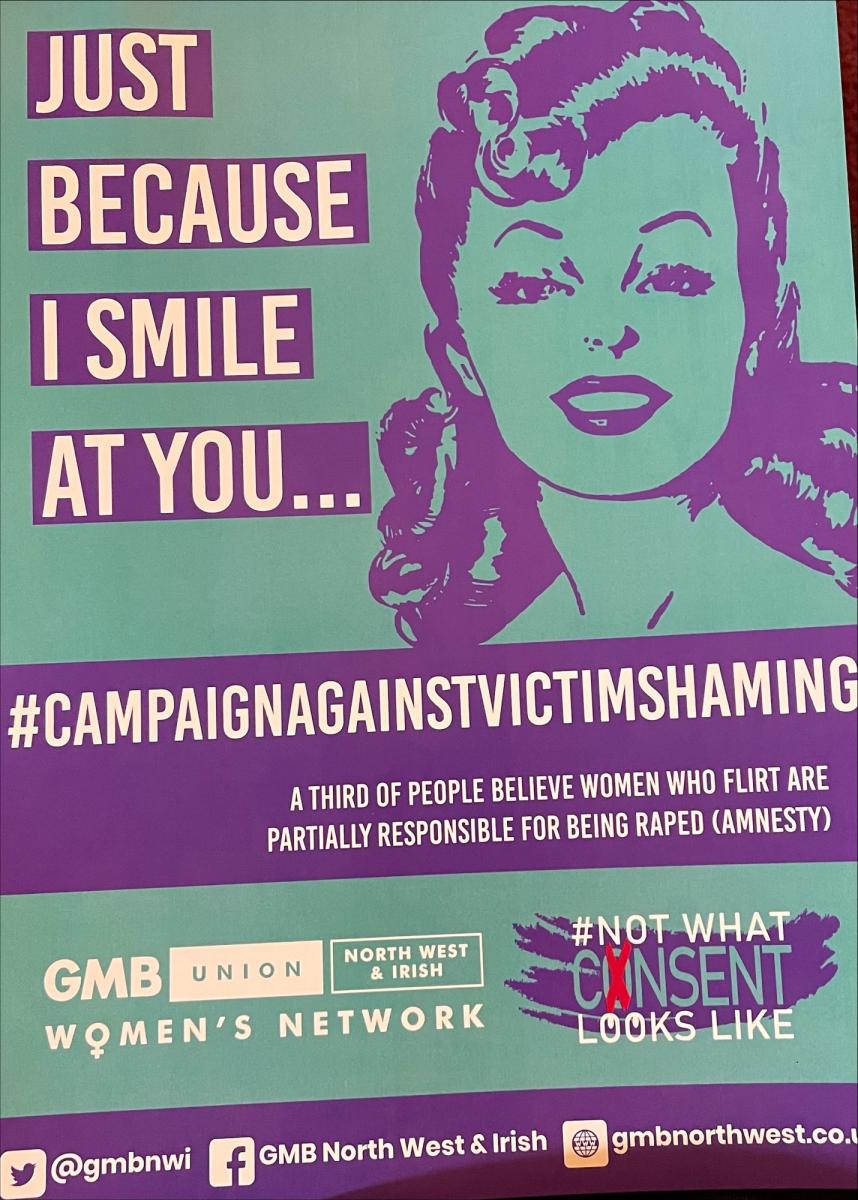 Please note this is not a ballot, this is a survey only.

GMB UNION MEMBERS ASKED TO HAVE YOUR

LONG COVID AND THE NEW THREAT TO