For too long Asda retail colleagues have borne the brunt of a race to the bottom in supermarkets ”Lowest cost to operate”, costing colleagues a lot more than it's delivering to customers.

THE LATEST PROPOSAL IS A STEP TOO FAR

ASDA are proposing a new base rate of £9 per hour

This wouldn't be paid until after all consultations are finished and the new contracts are implemented, so it’s unlikely to be before the end of the year. In April 2020 (just 4 months later) the minimum wage is set to increase to… guess what?

Yes £9 per hour and without giving up all your benefits.

WAIT 4 MONTHS AND GET IT ANYWAY WITHOUT GIVING UP ANYTHING

You are already doing less with more: QUEUE BUSTING - PICK BUSTING - COVERING 2 JOBS (because the store won’t cover sick calls or sometimes even holidays). Flexibility clearly isn't the problem or colleagues already on Contract 6 since 2017 would have been moved about, but guess what? They haven’t.

Removing paid breaks has been done via the back door for years by moving your lunch breaks. Unfortunately there’s no law that says breaks should be paid so ASDA remove paid breaks and that goes towards funding the pay increase.

SO NOT ONLY DO YOU LOSE OUT - YOU'RE EXPECTED TO FUND IT!

ASDA are saying; if you need to keep your hours (who doesn’t?) and if the store has the hours they can add them onto your contract so you don’t lose. GUESS WHAT? There are no hours! We've just been through 12 months of cuts!

WHAT ABOUT COLLEAGUES ON CHILD TAX CREDITS?

WHAT ABOUT COLLEAGUES WHO WORK 2 OR EVEN 3 JOBS

BECAUSE THERE ARE NO FULL TIME HOURS?

Originally, Night rate was time and a third until ASDA refused to pay it and moved to the ‘supplement’ scenario. Over the years this has significantly eradicated night pay and the new proposed rate is still lower than it would have been if they had left colleagues on time and a third. The removal of the night window from 10 - 6 to 12 - 5 makes it even less, so Guess what? Night colleagues & Twilights colleagues are again funding the proposed 'increase'.

Previously your holiday year didn't include bank Holidays , under this proposal it will.

The law says every employee is entitled to a minimum 5.6 weeks paid leave (28 days if you work 5 days per week), this can include bank holidays, so whilst the proposal isn't illegal it is immoral! By including bank holidays, what’s to stop managers insisting they need colleagues in, knowing that they don't want to work them and will book a holiday which of course the manager will have no problem authorising, because that would leave you with less than 3 weeks to have with your family in blocks.

How long since they were ‘EMPLOYER OF THE YEAR’?

distribution these are classed as unsociable hours). They get night rate between 10pm - 6am.

YOU WORK FOR THE SAME EMPLOYER

YOU HAVE THE SAME FAMILY COMMITMENTS

YOU HAVE THE SAME BILLS TO PAY

YOU WORK JUST AS HARD AS THEY DO

SO ISN’T IT TIME YOU WERE TREATED & PAID THE SAME?

ASDA claim the new contract will mean a higher rate of pay. You will get it anyway next April ASDA claim working festive Bank Holidays would be voluntary They already are ASDA claim you will have guaranteed contracted hours There’s no such thing - you’ve seen hours cut everywhere over the last 12 months No guaranteed hours then! So in other words… THEY ARE GIVING YOU NOTHING & YOU ARE EXPECTED TO GIVE UP A LOT 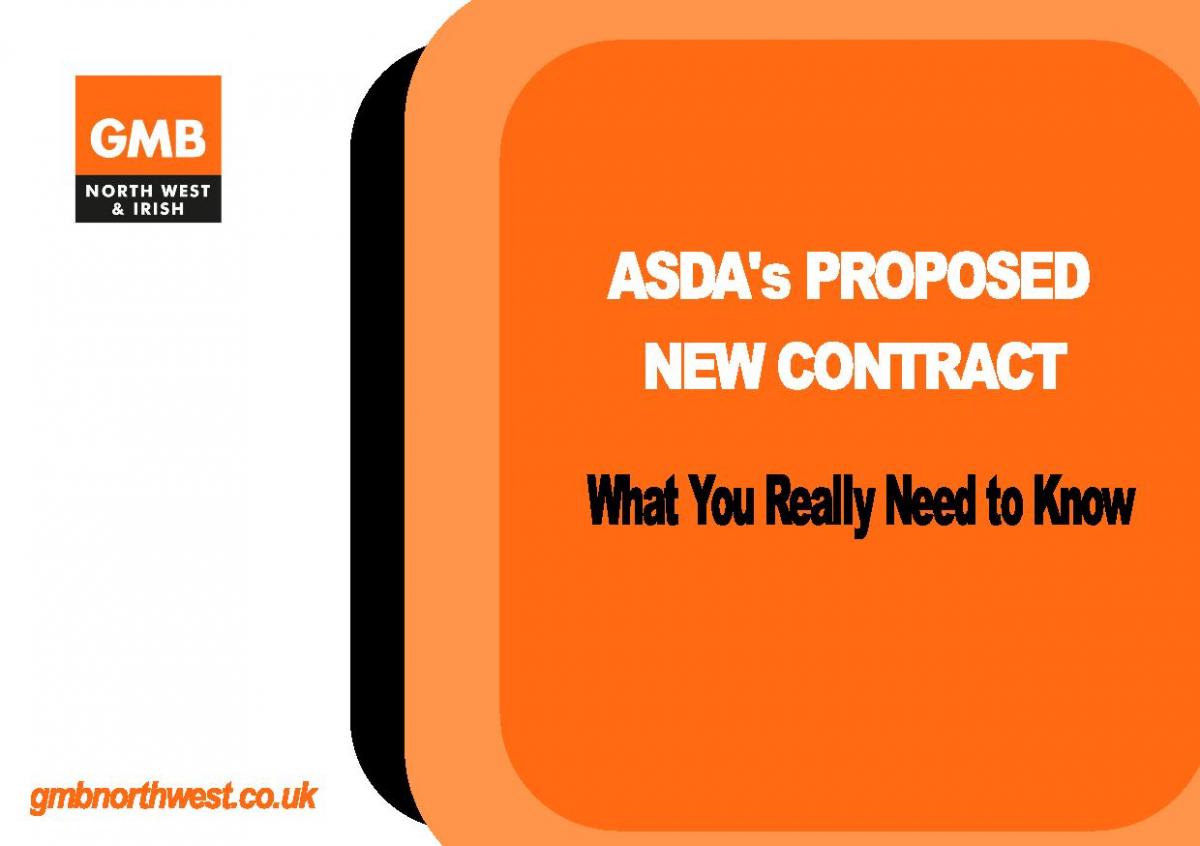